Church of the Transfiguration completed, Mattituck, 1970

American Greeks have a patriotism rooted in their culture. Andrew T. Kopan Ph.D. in “Defenders of the Democracy: Greek Americans in the Military,” Greek American Review, September 1998, pp. 5-10, wrote: Immigrants remained close to their hearts. The Greeks, founders of democracy 2,500 years ago, have steeped themselves in its defense during their long and glorious history. Advocacy for country and democracy was a trait of Greek immigrants regardless of the country to which they immigrated. This is especially true in the United States, where despite their small numbers in the total population, they have served in virtually every American war.

I have written about many people who built the Greek Orthodox Church of the Transfiguration of Christ in Mattituck, Long Island. The last living founder in 2022 was John Epidy. He is a Greek American who has all the qualities of patriotism. He never forgot his Greek Orthodox Church.

John Epidy passed away peacefully on March 28, 2022, at the age of 88. John was the most devoted husband, father, grandfather and great-grandfather. He was predeceased by his parents, Alexandra and Théodore. John is survived by his wife Katy, his four children, Alexandra, Ted, Michele and Elena; his sons-in-law, Dimitri, John and David; daughter-in-law, Terri; and his brother George: grandchildren. Christopher, Jacqueline, Johnny, Tyler, Teddy, Noelle, Johnny, Jenna, Kayla and Nyles; and great-grandchildren of Evelyn Rose, James and Sophia Valentina. 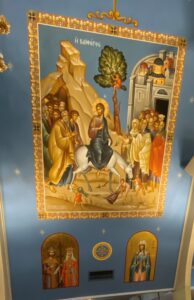 “It is a double honor for me as fire department chaplain to conduct John’s funeral,” said Pastor Andrew Cadieux of the Church of the Transfiguration. “John was a Korean War veteran and retired New York City firefighter who risked his life in community service. Southold supervisor Scott A. Russell in his message of condolence said, “I have enjoyed working with John on several community issues over the years. He was always a gentleman and a pleasure to work with. He stood his ground when he deemed it necessary and demonstrated the courage of his convictions, however, he also demonstrated that it is possible to stand up for what is right and, while being respectful, while you are. . 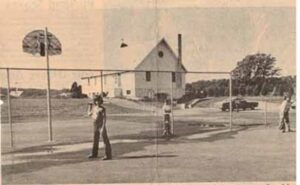 Playground created by M. Epidy in the mid-1970s.

John Epidy and his in-laws, Mr. and Mrs. Mike John and his daughter’s in-laws, Mr. and Mrs. Andreas Papadopoulos influenced the development of the first Greek Orthodox Church in the East End. Ms. Helen and Mike John, immigrants from Nicosia Cyprus, had church services in their backyard. John Epidy’s family played a major influence in the 1960s-1980s. Son of refugees from Asia Minor (Western Anatolia), he was a firefighter with four children. His wife, Kay Epidy, daughter of Cypriot immigrants, encouraged her husband in his voluntary work. At the October 11, 1969, groundbreaking ceremony with the Right Reverend John Poulos of St. Demetrios Cathedral, Astoria, Mr. Epidy was Vice President of the North Fork Greek Community Association which initiated construction of the ‘church.

Her father-in-law, Mike John, was a member of the board of trustees in 1971 and the audit committee when the church was known as the North Fork Greek Community Association. John Epidy’s mother, Mrs. Alexandra Epidy, an aristocratic blonde grand lady from Asia Minor, was engaged in the church, serving on the dance committee in 1973 with her brother-in-law Mike John. In September 1973, the Church changed from the North Fork Greek Community Association to the Church of the Transfiguration of Christ. 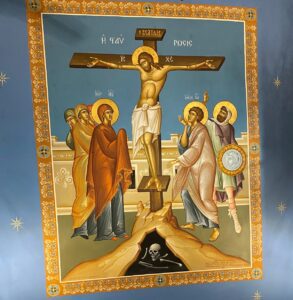 Crucifixion, 2022 Transfiguration Iconography of the Church

Mrs. Alexandra Epidy and her in-laws Mrs. Helen John, a legendary educator from St. Demetrios Greek American School of Astoria, Mike John (Food Committee) served on the 4and Annual Dance September 1, 1973 to 1975. At the Fifth Annual Dance, August 31, 1974, Mrs. Alexandra Epidy (Ticket Committee) and Mike John (Food Committee) volunteered their services. Mr. John Epidy’s family worked and supported him in his work. It was teamwork. The early years should be remembered, not forgotten. Mr. and Mrs. Athena and Andreas Papadopoulos served on the same committees for many years.

Mr. John Epidy was Treasurer of the Parish Council from 1975 to 1979 and a force in the dance parties. His daughter, Alexandra Epidy, who became a Vassar graduate and an educator in the Mattituck school system, served as a Sunday school teacher and volunteer in church dances from 1975 to 1976. Kay Epidy served as secretary during over 12 years in the Mattituck-Cutchogue school system. Her twins, Elaine, and Michele were students of the Hellenic Culture School of twenty-two students in 1975-1976. Mr. Epidy was president of the 1976 popular ball.

Southold Town supervisor Scott Russell was friends with Michele and Elena Epidy. “I remember coming to church youth activities when I was a teenager in the 1970s,” he said on a previous occasion. “What began many years ago as a newly founded Greek Orthodox Church in Mattituck with a few parishioners has now grown into the prominent Greek Orthodox Church in Southold. The Greek Festival and Greek American Night drew hundreds of visitors from all over Long Island. How proud you must be of your many fine accomplishments. I want to personally thank you for the wonderful contributions your church has made to Southold Town…May you grow and prosper for generations to come.

He supported youth activities involving his four children, Alexandra, Teddy, Elena and Michele. In September 1975, he helped establish play facilities consisting of a basketball court and a tennis court. Today, a covered picnic area and cabana sit on the original recreation grounds. The new structure reflects the new needs of the community which is geared towards the elderly, due to changing demographics and intermarriage attending other religious institutions. Mr. John Epidy, a community activist/church founder, was admired by people of his generation as the future of the church. His family shaped the early history of the Church of the Transfiguration of Christ. John Epidy was a kind and loyal person who is remembered by all.

A former church-turned-modern home in Rockport is up for sale for $2.8 million