Create a Catholic Church she can belong to

(RNS) – Jamie Manson is a Catholic whose work is entirely church-focused while existing almost completely beyond the confines of Catholic teaching.

Longtime author of the National Catholic Reporter’s award-winning column “Grace on the Margins,” Manson is president of Catholics for Choice, a nearly half-century-old group that advocates for abortion access in the face of fierce opposition from the ecclesiastical hierarchy.

She doesn’t do it quietly. In January, Catholics for Choice demonstrated on the eve of this year’s March for Life, projecting images onto the walls of the Basilica of the National Shrine of the Immaculate Conception in Washington, DC, as leaders of the church and abortion haters were holding a “prayer for life” vigil inside. One of the projections showed a statistic that 1 in 4 abortion patients is Catholic.

RELATED: A revival is coming to American religion. You won’t hear about it from the pulpit.

Manson’s prayer at the protest reflected both his stance on abortion and, by implication, his criticism of the church. “God of compassion, be present to all those who have had an abortion; may they feel your love,” she said. “Be with all abortion providers; may they be safe. Support them with your comfort and courage.

Messages expressing support for abortion rights are projected on the Basilica of the National Shrine of the Immaculate Conception in Washington, DC on January 20, 2021. The messages were part of a protest organized by the liberal advocacy group Catholics forChoice. RNS photo by Jack Jenkins

As an abortion rights activist and organizer and a lesbian, she is often asked why she doesn’t just walk away and find a more comfortable spiritual home.

Part of her response is that she wants to help Catholics on the fringes claim their place as shapers of the future of Catholicism. But she also tells a story about her upbringing on Long Island, New York, with her Italian Catholic grandmother, who stopped going to church after being scolded by the local priest. Instead, her grandmother started a church in her own home. Growing up, Manson rarely attended church outside of major Christian holidays and had little contact with Catholic leaders.

She was nevertheless immersed in Catholic ritual and the stories of her grandparents, and almost everyone in her orbit considered themselves Catholic. In her early teens, Manson even felt called to be a priest. Despite her family’s dissent and her own rejection of the church, today she still feels that the church is her calling.

Her path to leadership began while attending Yale Divinity School, where she met the famous scholar Sister Margaret Farley. Farley taught him that Catholics have a sacramental worldview, which holds that the sacred is in every person. In Manson’s words, “we are in a co-creative relationship with God. …Once you take on a sacramental worldview, those barriers that we place around the church come down. It becomes impossible to tell where the church begins and where it ends, because everything and everything is sacred. 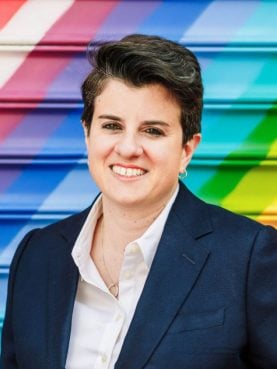 While she herself felt marginalized from Catholicism, she came to believe that Catholicism offered the very theology that promised her belonging, and promised it to so many others. “If there is one truth that has been consistently reinforced over the decades that I have lived this calling, it is that God also dwells on the fringes.”

In 2005, she was hired as a pastoral associate and director of religious formation at St. Francis Xavier Catholic Church in Manhattan, a parish dedicated to supporting the poor, homeless, and LGBTQ people. In Xavier Manson found a church that supported the vision she had formed at Yale. Women were encouraged to preach in services upstairs, while downstairs in the church basement nearly a thousand people were fed, regardless of gender identity or sexuality .

For Manson, it was the ultimate expression of Catholicism. “What I see now is a church that takes so many women and LGBTQ people away from the table, rather than nurturing them and showing them God’s abundant and boundless love for each of God’s children.”

Since taking over the leadership of Catholics for Choice, Manson continues to meet others struggling to find faith and belonging as she once did. Many like her are looking for meaning in the Catholic tradition and are ready to hear the notion of God in creation. “But when they see where the church hierarchy has put their energy, resources and money,” she says, “they find it abhorrent. The hypocrisy of church misogyny, homophobia and transphobia drives people to just walk away. It is a tragic loss for them and for the church.

Honoring the people who inspired her and helped her find her belonging on the margins, Manson wants to “be with people who have been deeply hurt by the church,” she said, “to try to recover the essence of Catholicism, to help its spirit survive, and to help people see the sacred in themselves, in others, in the world.

Manson’s work, while centering abortion, contraception, and women’s rights, aims to bring American Catholicism closer to the reality of its adherents.

The Catholic Church in America is the most racially diverse Christian denomination in the country, reflecting the seismic shifts occurring in church demographics. Populated for generations by European immigrants who came to the United States in the late 19th to mid-20th centuries, the church over the past 20 years has lost 18% of its membership, more than any other American religious tradition. Only 31% of American Catholics rate the honesty or ethical standards of their clergy as “high.”

In recent decades, the church has again come to rely on immigrants for its growth, many of them struggling to find their place in their new country.

Leaders like Manson suggest that a new Catholic leadership is rising to respond to this new Catholic population. Faced with her own rejection of the Church, she, along with others, chose to reclaim Catholicism from a conservative American hierarchy that gave primacy to dogma.

“I have sought to do this through my columns by giving a voice to those who may not fit into the rigid structures of the church,” Manson said, “and, through Catholics for Choice, helping people to feel that their Catholic spirit is calling them to action.”

Like many religious reformers before her, Manson is creating the church she wants to belong to. “I can’t help imagining the community of faith that I seek: a community defined by a radical pious inclusiveness, a relationship with nature, a community that welcomes all in communion around a common table”, said she declared. “One in which work, prayer, education and shared meals all seek to create connection, so that the sacred is felt knowing that I, we belong.”

The difference is that she creates this church within the one to which she already belongs.